Adulting… It’s the new word to describe being a “grown up” though Webster’s hasn’t officially deemed it a word. The definitions I could find are Adult: Mature & Sensible and Grown Up: No longer young/fully grown. While I do qualify under both definitions, I have to say, I don’t often give a lot of thought to my being a grown up/adult. That is, until I have moments where I’m clearly not doing a very good job at it.

A couple weeks ago, I took a trip to Maine. Everything went smoothly on the trip, no reason to question my ability to “adult.” That is until I was nearly home. Like, on the plane, making the final descent into the airport where I was to have a connecting flight.

My original itinerary had me flying into Newark, NJ for my connecting flight to Kansas City and landing in Kansas City at 11 P.M. On my way to Maine, I had a connection in Chicago. Flying in, there was an amazing sunrise and Chicago appeared out of the clouds just as we reached the coastline. 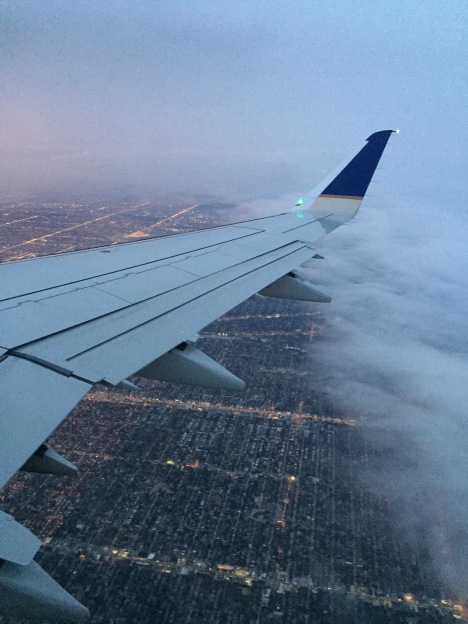 I mention this about the coastline because on my way back to Kansas City, I knew I was flying into Newark. However, as we began our final descent; in my completely exhausted and checked out state, listening to music and not the pilot, I looked out the window and again saw the same coastline. I thought to myself, “There’s Chicago again.”

Then, a few minutes later, it dawned on me that this was NOT what I was supposed to be seeing out of my window! I checked my itinerary again, it said my layover was in Chicago, not Newark. I checked my emails, I remembered getting one from Expedia shortly after my flight was booked, though the only detail I remembered was that the departure time from Portland had changed. Turns out that email also mentioned that I would be flying into Chicago for my connecting flight. And, arriving in Kansas City nearly 2 hours earlier than I thought.

Apparently, this change should have dawned on me much sooner than it did, as the flight from Portland to Newark would naturally be much shorter than the one to Chicago. But really… once I’m on the plane, the only thing I really pay any attention to is the scenery outside the window and/or the book I’m reading. Those who know me aren’t surprised by this story. As I told a few friends, it’s a really good thing there are security measures in place to keep me from getting on the wrong plane! Although, it might be fun to see where I ended up!